A beautiful but tough joke was made by one of the comedians the other day: "If today's main page of RBC was shown to people in December last year, more people would have died from a heart attack than in the spring from a coronavirus."

Back in early March, it seemed unthinkable to put a multi-million-dollar city under quarantine (sorry-self-isolation) and force residents to get special permits and sweep up buckwheat. Today, we have adapted well to this reality.

The authorities did not prohibit walking dogs near the house. Immediately there were messages about the delivery of Pets for rent. They say that for a reasonable fee, the tenant can take the dog for a walk, and at the same time go on some business. But all this is a joke from Facebook, they were not going to become a real business.

Yandex now shows the index of self-isolation in the city instead of the traffic level. It seems that the pass system and serious fines are working, but not completely -- the index from the average of 4 points is already changing to 2.8 (April 29), that is, there are a lot of people on the streets.

Nikolskaya during the pandemic

Better statistics about the isolation they say the empty Moscow streets. In the photo-the main promenade during the 2018 world Cup-Nikolskaya street. 2.7 million tourists came to the capital at that time. And every second one has definitely walked through it. Now only people in uniform walk here.
Every day, the city is patrolled by about 17 thousand police, Federal guardsmen and vigilantes. They check special passes and make reports on violators.

Moscow without traffic jams is a rare phenomenon. The authorities claimed that now they will be fined 5 thousand rubles for violating the regime based on the shooting of a photo-video recording camera. Lawyers are confident that such fines will be considered illegal. However, there are still a lot of drivers.

Today, a QR code is a necessity, and social distancing is a sign of good manners. The latter, by the way, would be nice to keep in the life that will be after the coronavirus. 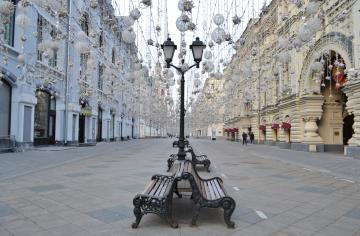