Europe Slowly Gets Back To Building Cars

The Covid-19 pandemic has been devastating to the world's economy, as workers stayed home and factories ground to a halt to slow the spread of the virus. But there is some good news, as a few auto and motorcycle manufacturers have finally opened select plants again for production.

In North America, Mercedes-Benz is the first carmaker to reopen a factory, this one in Tuscaloosa, Alabama that builds the GLE, GL and GLE Coupe SUVs. On a larger scale, Europe is slowly starting to get back to producing vehicles. Volkswagen had already reopened its plant in Zwickau, Germany, to work on the ID.3 electric car, and then restarted its largest factory in Wolfsburg, first for the Golf, with Tiguan, Touran and SEAT Tarracco production coming online today. It also opened a plant in Bratislava, Slovakia.

Skoda , which is owned by Volkswagen, has resumed building cars at three plants in the Czech Republic. Audi , also owned by VW, has already begun building the A3 and Q2 in Ingolstadt, Germany, while restarting its engine production in Gyoer, Hungary.

Ducati , the Italian motorcycle manufacturer, has slowly resumed production at its plant in Bologna. Also in Italy, FCA returned to its Atessa factory to start building vans. And in France, Toyota is back to work at an assembly plant, while Renault is building engines again.

Of course, you can't build cars without suppliers, and many of those have also gone back to work to help the manufacturers get their products off the factory floor.

No manufacturer is back to full capacity as of yet, and all have taken great precautions in protecting its workers, such as an increase in hand sanitizer stations, plexiglass separators between people, smaller and fewer shifts, a demand for employees to stay at least two meters apart and a supply of personal protective equipment, among many other measures. But it's still an encouraging start, and the early days of May will see other companies begin a slow rollout again. 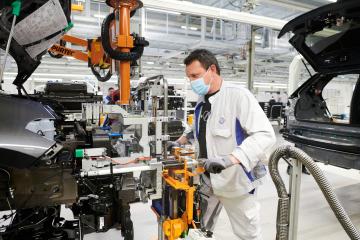