If you're a fan of Tesla CEO Elon Musk and own stock in his company, you might need to take a seat. After Musk sent a tweet lamenting that the company's stock price was too high, it dropped a whopping 12 percent before leveling out at about a 9.5 percent drop overall for the day. This was just one in a series of odd posts from the CEO that included song lyrics, the due date of his child, and that his recording artist girlfriend Grimes was angry with him. Oh, also he's going to sell all his stuff.

The initial Musk tweet during today's barrage of messages was, "I am selling almost all physical possessions. Will own no house." He later clarified that he doesn't need the money, that he is "devoting himself to Earth and Mars," and that possessions just "weigh you down."

But his second tweet, "Tesla stock price is too high imo" not only brought down Tesla's stock two days after surprisingly good quarterly results considering the current pandemic, but it also may have put him in hot water with the Securities and Exchange Commission (SEC).

CNN reports that last year's deal with the SEC with Musk about his tweets affecting the stock price of his company included the CEO conferring with an "experienced securities lawyer." This included messages that Tesla's board may feel it needs approval before being sent, "if they think pre-approval 'would protect the interests' of shareholders." Tweeting that the stock is too high and the result is a drop in the price might meet that condition.

Car and Driver has reached out the SEC about the situation and will update the article when it responds.

The Wall Street Journal reports that, when contacted via email about the stock tweet asking if Musk had it vetted before sending or if it was a joke, he replied: "No."

Tesla was riding high, stock-wise, after a bump from Credit Suisse noting that the company could weather the coronavirus situation better than other companies. It traded at $781.88 (an 82 percent gain for the year) at the end of the day on Thursday. Today's barrage of messages lopped off some of those gains.

As the day progressed, Musk also tweeted, "Now give people back their FREEDOM," a reference to his earlier tweets from this week about the shelter-in-place orders being unpatriotic and "fascist." He also posted the lyrics to "The Star-Spangled Banner" and shared with the world that his girlfriend Grimes was mad at him and that their child is due on Monday. 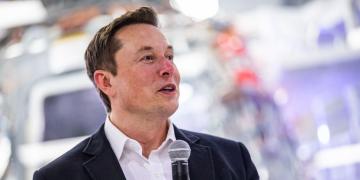