posted at the Cohort by John Lloyd

My dad bought one like this in the then current turquoise color with matching interior. IIRC, it was also our first car with A/C! Poly 318 and Torqueflite; I also got my driver's license in that car! What was amazing to me was how much longer and sleeker the 66 version appeared to be, and I eventually ended up owning a 66 Sport Fury! 2. Reply

I've mentioned before that our driver's training car in the summer of 65 in small town Indiana was a white 1965 Plymouth Fury III sedan. I have pleasant memories of that car -- 318, Torqueflite, the infamous low effort P/S, and a big greenhouse -- all made it an easy car to drive and park. IIRC it had the combination vinyl and cloth upholstery in pale blue.

At the time I was disappointed not to have been assigned to the other car used for our two groups that hot summer -- a burgundy 1965 Chevy Impala hardtop with A/C. But at least the Fury was white and the seats were a lighter shade and didn't stick to us badly and it was probably easier to park than the big Impala.

The Plymouth did have a few quality issues, most notably the transmission selector was out of alignment with the quadrant (maybe Chrysler was out of practice given they hadn't used a column selector for the automatic since 1954). Overall a good and handsome car that sold well in our area and brought Plymouth back after the disastrous downsizing from 62-64. And this one helped me get my license one month after my 16th birthday, five months earlier than if I'd not taken driver's training! 3. Reply

For 1965, I would give a slight edge to the Dodge Polara. Perhaps it's because a buddy of mine's Dad had the Dodge, and we would stand around on our bikes after getting back from a game of wallball in the schoolyard in Grade 8 or so, and stare at his Dad's car parked next to the curb before he had to go in for dinner and I had to go home. Both the Plymouth and the Dodge looked to have shared the same greenhouse, but the Dodge's taillights were a bit more stylish and the front grille resembled a barbell (as I would read later. Terry's Dad's car was about the same blue as this Plymouth.

This is a very nice action shot, without any distractions. Nice photography. 4. Reply

1965 was definitely a good year for the Big Three, with Chevy, Ford and Plymouth all sporting major restyles. All were different, all unique and all worked. Have to give a slight edge to the beautiful Impala, but I can now appreciate that big greenhouse on the Furys. The new LTD was amazingly luxurious, before the decontenting set in a few years later.

I thought the floodlit instrument panel on the Plymouth was cool, as were the directional signal lights on top of the fender edge. 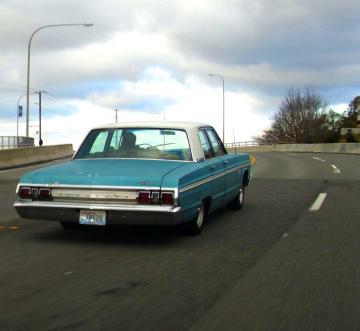