Bernie Ecclestone on the future of F1, dictators and Elon Musk

Yep, Ecclestone has a large bronze bust of himself behind his desk Modern F1 is not entertaining enough, according to Ecclestone Bernie says that Verstappen would be a world champion if he had Hamilton's team What's bigger, F1 or Ferrari? Ferrari all the way, says Bern Bernie has nostalgia for F1's old days, but says he looks forward rather than back "F1 has been established for 50 years; why change it?" Bernie reckons Vettel should have stayed at Red Bull Bernie: F1 needs more characters, like Nelson Piquet Ecclestone is going on 90 now, but still spry "I would have buried it," says Bernie of Formula E

On the wrong side of racing purists, Munich prosecutors and a Labour Party funding scandal. On the wrong side of the law, too, if you wish to believe the mythology surrounding the Great Train Robbery -- but, as you'll hear later from the man himself, there wasn't enough cash in that for it to be worth his involvement.

Bernie. The man whose name and number reside in my mobile phone, but who in more than 12 months I have yet to summon the nerve to call. Somehow the journey from explaining how I have his number to asking for an interview feels like an insurmountable leap. Worse than asking a girl out on a date. Worse even than asking her father if you can marry her. Fear and trepidation. Clammy hands and a sweaty brow. Pull yourself together.

"Hello?" The voice is unmistakable, but the speaker is unwilling to give the game away.

"Mr Ecclestone?" For the 30 years I've followed Formula 1, he has always been Bernie, but what else am I going to call him?

"Who is it?" Polite but detached.

"Jim Holder from Autocar. I hope you've heard of us; I was wondering if you'd be available for an interview."

"Older, actually -- assuming you've been telling the truth about your age all these years." Why oh why did I feel the need to crack a joke?

"Right, yes, no problem. I'll call you back with a date." A chuckle, warmer now. Phew.

That's it. He's gone. Perhaps to Google the history of Autocar.

He doesn't call back, but now I have an excuse to chase. Ecclestone is always polite, sometimes apologetic, but busy.

And then one day in early March my phone rings. "What are you doing at 11 o'clock tomorrow?" 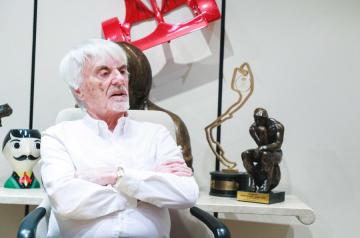