Despite Detroit automakers signaling a readiness to resume production, Whitmer has extended stay-at-home orders through May 15th --- lifting some earlier restrictions on business and travel. However, the automotive industry still doesn't have an official date to get things moving again, just a series of business plans outlining a gradual ramping up of production once lockdown mandates end.

With people split between throwing open the shutters and confronting the coronavirus pandemic head-on and acting like it doesn't exist while staying indoors for an indeterminate amount of time as the economy crumbles, there's been no shortage of arguing about the best approach for COVID-19 . Don't spread this around, but we've had some disagreements within our own ranks about how things should be handled.

Everyone has reasons for their opinion. Some people just want to feel safe through the health crisis; others think government officials and tech companies are abusing their power. For many wanting a return to normalcy, it's the business aspect that matters most. Small outlets bemoan giant retailers qualifying as an "essential service" due to the fact they also sell food stuffs, and companies of all sizes have begun to notice that federal funding has its limitations and foibles --- including the purveyors of auto parts.

Suppliers want to know when they'll be able to restart factories, noting that supply chains take some time to reach automakers. On Thursday, MEMA President and CEO Bill Long, in addition to OESA President and CEO Julie Fream, sent a letter to Gov. Whitmer requesting that she "provide clear authority for automotive suppliers to restart their operations in Michigan at least five days before OEM production begins."

In addition to giving supply chains adequate time to catch up, the parts lobby claims the advanced notice would also help suppliers manage new safety protocols aimed at curbing the spread of COVID-19. They also included a warning, suggesting that any "delays in re-opening facilities would increase liquidity risk for suppliers and jeopardize long-term capital investment and employment for Michigan."

We've seen complications emerge already. Factory delays became common before the pandemic took hold in North America , and we saw our first outright cancellation of a car this week. Most automaker have already said production would have be built back up gradually to address supply chain issues. Volkswagen, Toyota, and Subaru have even gone so far as to independently push back their own production schedules , citing this very problem.

Then we have the OEMs themselves.

Parts suppliers typically have smaller cash reserves than automakers but are major employers in the State of Michigan (representing well over 100,000 jobs). Having these positions suddenly disappear would obviously be bad, creating untold headaches for vehicle manufacturers around the globe. Some of the smaller suppliers are already at death's door and we'll undoubtedly lose more than a few in 2020.

As for Gov. Whitmer, she's been in talks with Detroit automakers and the UAW, who harbor vaguely conflicting opinions on stay-at-home orders . That hasn't stopped her from towing the line when it comes to walking back or instituting new rules. Michigan, which was hit particularly hard by the last recession and decades of outsourced factory jobs, has a population that's notoriously eager to work. We learned last month, as protests manifested at the state capitol and around the nation, that they're also not super keen on Whitmer's executive orders.

While these initially started out as highly organized events with most occupants remaining in their vehicles, unfavorable news coverage and Facebook's banning of pages organizing such protests (among other items) poked the hive last month. On Thursday, several hundred people descended on Lansing holding less playful signage with slogans about tyranny and how small businesses are dying. National outlets reported that some attendees were armed , and those who managed to enter the capitol building chanted "this is the people's house, you cannot lock us out."

Warranted or not, Gov. Whitmer has become a focal point for those wanting local authorities to ease restrictions; the collective ire will probably sway her to avoid prolonging existing shutdowns more than necessary. In fact, her last extension of stay-at-home orders could be seen as playing both angles. By prolonging the lockdown, she's appeasing a base that seems willing (though not enthralled) to stay home and dodge the bug. However, she also walked back several key restrictions that upset earlier protesters.

Still, it's not abundantly clear what the ultimate plan will be for Michigan. The coronavirus is still out there (until 2022, according to the latest from Bloomberg ) and there's no shortage of conflicting information floating around about it at the present time. Whitmer will have to balance whatever data she's managed to glean about the current status of the pandemic and the government's response while attempting to meet the desires of a population that's split on the issue. It's not a task we envy, but nobody forced her to run for office.

Whatever happens, we do hope she gives suppliers a week's head start. While lobby groups frequently do little more than attempt to stack the deck in their favor, they're technically correct in their assertion (this time). Whether the lockdown ends tomorrow or several months from now, OEMs will need extra time to reestablish supply lines. 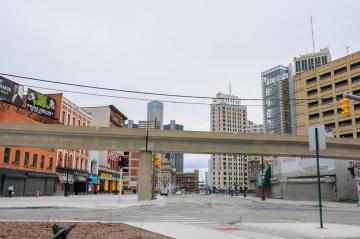