The nerds knew what they were onto at the dawn of the modern computing age. As silicon chips multiplied in power, miniaturized in size, and simplified the manufacturing of computers through the 1960s, engineers could already see just how far and wide the technology would spread into our workplaces, homes, and cars.

They envisioned electronic fuel injection and ignition timing as the new normal. They anticipated the widespread adoption of anti-lock-braking systems and oxygen sensors. And then they peered beyond the obvious and immediate. Surveying the experts, a 1971 issue of Popular Science predicted these new chips would democratize drowsiness detectors, auto-dimming high-beams, and selectively shuttered headlights---ideas that wouldn't become mass-production realities for decades. Any of those systems could be built at the time, RCA engineer Elvet Moore told the magazine. "The problem to be solved is producing it cheaply enough to satisfy the carmakers."

That open-ended problem---how cheap is cheap enough?---has propelled the development of computing technology over the past five decades. Moore's Law (named for Intel co-founder Gordon Moore, no relation to Elvet) neatly captures that steady march of progress: The number of transistors on a computer chip doubles roughly every two years. Its close corollary is that computing power becomes cheaper over time.

While individual chips may be cheap these days, the computer's significance is evident in just how many there are in a single car. Electronics are responsible for 40 percent of a new car's total cost.

The microprocessors and chips that power modern vehicles are now so prevalent that they're practically a commodity in the same vein as steel and aluminum. Computers are used in everything from the mundane (such as basic trip computers) to the near magical (think road-scanning active suspensions). They've made cars quicker, safer, cleaner, more efficient, and more reliable---better in every way. And while individual chips may be cheap these days, the computer's significance is evident in just how many there are in a single car. Electronics are responsible for 40 percent of a new car's total cost, according to a Deloitte analysis. That's up from 18 percent in 2000.

Computing technology has also fundamentally altered the processes of automotive design, engineering, and manufacturing. Digital tools empower engineers to turn out cars faster, with greater precision and confidence in their work. Parts fit together with tighter tolerances, virtual environments simulate a lifetime of testing in a matter of days, and assembly lines spit out cars as though they were die-cast models.

Computers have been disrupting cars for more than 50 years, and no one expects that reality to end anytime soon.

But the unyielding pace of computing progress may finally be slowing. In 2015, Moore predicted that his projection would soon become inaccurate, as computer components measured in nanometers run into physical limits. "I see Moore's Law dying here in the next decade or so," he said. Don't mistake that statement to mean all progress stops, though. Computers have been disrupting cars for more than 50 years, and no one expects that reality to end anytime soon. 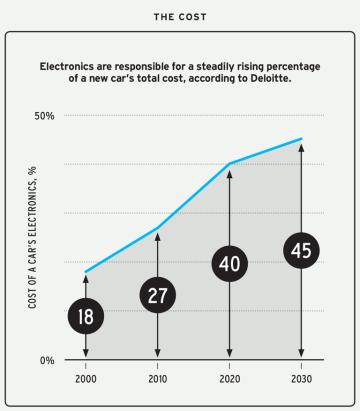