(first posted 6/7/2014) If I wasn't sure whether this Caprice was CC-worthy at first, my opinion changed the stickers in the rear window; the owner of the car was apparently an engineering student at the University of Dayton engineering. When you consider most younger people wouldn't choose to drive a car like this without a more fundamental understanding of its now-uncommon mechanicals, it actually makes sense. This is most definitely a "car guy's" choice.

There are generally two ways to appreciate a sedan like this; one, because you enjoy the big impression it makes or two, because you can appreciate the fundamental differences between its full-frame, rear drive V8 layout and most other cars on the road. Given its generous specification, with leather trim, the original buyer might have given the former consideration more bearing on his or her purchase, but when noting the dual exhausts, perhaps he or she might've been aiming for a sleeper Impala SS. The current owner no doubt knows the car's now-famous capabilities, though in basic Caprice Classic trim, I'm sure many casual onlookers do not.

The new-for-1991 Caprice was never appreciated for its style, but the minor tweaks which define this facelifted 1995 help its looks greatly. By deleting the rear wheel skirts--a styling flourish I ordinarily like--and adding a notch to the rear quarter light, the impression of visual mass was reduced, making the car less ungainly overall. It wasn't too big of a boon to sales, of course, as civilian versions of the car in Caprice trim weren't the biggest sellers by this point, but that just makes this siting more special.

Styling tweaks notwithstanding, these final Caprices were far from beautiful, but their appearance was at least appropriate to their mission as a soft, capacious conveyance. With the new-for-1994 LT1 engine, there was finally power to back up the expressive styling, even if its appearance in the car was almost accidental. The previous 5.7 couldn't meet upcoming emissions regulations, so reaching into the Corvette parts bin allowed engineers to keep a bigger engine on hand without having to spend much money. Despite the substitution of cheaper, heavier and more restrictive iron heads, it was a real win-win, with 260 horsepower (forty less than the contemporary Corvette) and 33o lb-ft of torque on tap.

With big tires, a limited-slip differential and a lower final drive, the Impala SS made it to sixty in 6.5 seconds; the Buick Roadmaster, with smaller rolling stock and a taller rear end, took 7.8 seconds. The Impala topped out at 142 miles per hour, while the Roadmaster's limiter ended the fun at 108; at least the super tall gearing allowed the engine to loaf along at 2400 rpm at that speed. This Caprice is probably closer to the Impala in terms of performance, since the Chevy's optional engine (standard in the Buick) also came with the Impala's lower final drive. In any case, do not assume all 1994-1996 Caprices come with the LT1 standard; many came with the standard 4.3 liter L99 V8, which met emissions standards all the way to the bitter end in 1996, when OBDII was launched (so also remember that swapping an earlier engine into a '96 takes a little extra effort).

The seating surfaces and armrests show this has been a well-preserved car. Let's hope it stays that way; as cars that mark the end of an era, there need to be a few which stay in clean, original condition (outside of Florida). When looking at this car, I am reminded of my best friend's grandfather who was an aerospace engineer at GE. He drove cars like this until they went out of production, after which point, he moved on to a G-body Bonneville (his last car), and I like to think he recognized solid mechanicals when he saw them. The fact that he wasn't convinced by the Lumina further backs that up; by the time 1997 rolled around, GM was really phoning it in with that car. Replacing the Caprice and Impala SS with a front-drive chassis really required a supercharged 3800 in an H, C or G body, not a reskinned original W-platform.

That, of course, is a nearly twenty year old story and 1996 was a very different time. I suspect more than a few Chevy buyers were very content with their Tahoes and Suburbans, and that those trucks brought in a younger, spendier audience than did the the Caprice. Better in GM's mind, I'm sure, not to put too much effort into any direct successor, especially when the indirect replacement was already far from competitive.

Ford would draw the remaining traditional all-American sedan customers over to the Crown Vic and Grand Marquis over the next fifteen years, but those twins never had the cachet of the big GMs, sacrificing oomph and isolation for a marginally more modern driving experience, slightly more cohesive style and better fit and finish. As an engineer-acquaintance of mine owns one of those cars, I suspect their no-nonsense appeal is much the same as this Chevy's, though for me, a Park Ave would make a better replacement. As always, opinions on these "beached whales" are generally hotly contested, with some regarding them as Deadly Sin contenders, but to quote Tom Klockau, I feel they were the last of the best. 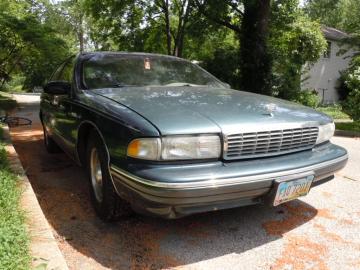