Let's skip the details of how these two cars from different eras came to be side by side, but the example turned out to be convincing. Here, look, they are standing on a dirt road in front of a thawing forest with a task to drive 4 km on a muddy track. And whose will it take? It is necessary to travel on the highway on the other side of the forest. Who will win?

5 reasons to put on UAZ hunter

5 reasons to put on a Range Rover Sport

So, can modern electronics replace the frame and beams of bridges? Watch our experiment with the answer to this question in the video below. I put on the RRS, or rather drove it. 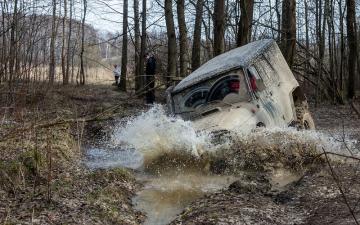