Brian Loughans has delivered more hot dinners than you've had... erm... Brian is keen to combat the image of takeaway drivers as "go-faster idiots" Emergency rations are part of Brian's kit Restaurant owner Raf says of Brian: "He's a great representative for my business"

To most of us that night in February 2018, it was the Beast from the East, but to one impatient householder waiting on his takeaway order, it was going to be the Feast from the East: a chicken jalfrezi with pilau rice, two naan bread and a side of pickles.

Not even the sight of the delivery driver who'd braved the heavy snow to bring it to him and was now shivering on his doorstep holding the precious food in his outstretched hands could melt his heart.

"If it's cold, I ain't paying," he grumbled, taking the bag. As the man made to slam shut his front door, his wife and daughter appeared at his side and peered at the ashen-faced driver.

"Oh my God, that's the man who rescued us just now when our car broke down in the snow! " exclaimed the woman.

"He picked us up and took us as close to home as he could before he had to make his next delivery," said her daughter. "He's a hero!"

Humbled by the driver's act of kindness and shamed by his rudeness, the man began to apologise. Too late: like all the best heroes, the takeaway driver, Brian Loughans, hadn't waited for thanks but instead was making his way back through the Arctic blizzard to his car, his mind set on ferrying another curry to a starving customer sprawled in front of their gas fire. 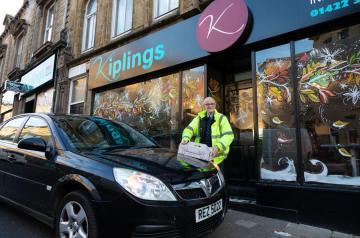