In March, the auto industry, like so many other industries, hit the pause button. Companies around the world halted car production and sent workers home to stop the spread of the coronavirus , which causes COVID-19 . Now, as the world begins to get a handle on the virus, automakers have begun to restart production.

Just as we saw in our coronavirus plant shutdown list, the first automakers to restart production are in Europe. We'll update this list as more automakers return to work and start building cars.

The Blue Oval gradually restarted production in Europe beginning with facilities in Germany and Romania on May 4. It's still unclear when production will restart in the UK, however. Although manufacturing is back online, the gradual restart will cover sold customer vehicle orders from dealers. Full production won't ramp up for a few months yet as the automaker takes all necessary precautions to protect workers.

On May 4, the Italian marque slowly began bringing workers back to its plant in Maranello to restart production. Full production will resume on May 8. The company said all restarts are in accordance with government orders and the firm developed its "Back on Track" program to aggressively screen workers for COVID-19. The plan includes voluntary blood tests and an app to notify when workers may have come in contact with someone positive for the virus.

On May 4, French supercar maker Bugatti restarted production at its facility with strict protocols in place to protect workers. Each employee receives a new mask at the start of the day and must wear it on the premises at all times while practicing social distancing. Nevertheless, hand-built Bugattis are back in business.

The British carmaker tells Roadshow production restarted on May 4 and says, "We've taken this decision because we are receiving orders from our customers and we are heeding the British government's call to resume production and support the British economy."

As of April 29, Porsche began the process of ramping up to restart production on May 4. The automaker said after weeks of supply chain bottlenecks, it's now possible to build cars again, though it originally shut its two factories down to slow the spread of COVID-19.

In the weeks to come, Porsche will gradually increase production to full capacity. When production kicks begins on May 4, work will focus on "task-specific jobs" to start. Workers will be required to keep a safe distance from one another and wear face masks it certain areas of the plants.

On April 28, FCA announced work restarted at its Sevel factory in Atessa, Italy, a joint-venture with the company's soon-to-be merger partner, PSA Group. The plant's responsible for building commercial vehicles in Europe and it's a positive sign overall. Italy quickly became the European epicenter for the coronavirus pandemic. Every worker will receive a new mask and gloves daily and the plant is equipped with numerous disinfecting stations and new elements to enforce social distancing.

After shutting down all operations on March 16, Renault restarted production at a factory in Slovenia on April 28, Automotive News Europe reports . For now, the factory will run a single day shift and full production will begin on May 11.

The Swedish luxury carmaker said on April 27 it restarted production on April 20. Its plant in Torslanda, Sweden, remains operational and the company installed modifications to work stations to adhere to social distancing guidelines. 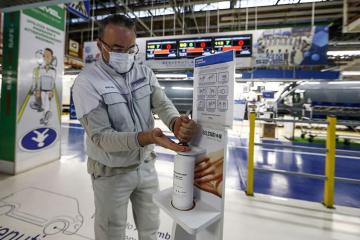