Lenders are cutting Hertz a break by affording the company an extended grace period, giving it a chance to cope with its debt. Last we checked on the rental agency, things weren't going well . With governments cracking down on movement amid the coronavirus pandemic, no one is going anywhere --- and the Hertz's bottom line showcases exactly how bad this has been for business. Hertz had to bring in economic advisors to help the business manage its swiftly mounting debt load as it discussed how to avoid bankruptcy.

Similarly hit by the pandemic, airlines got a multi-billion-dollar bailout. Agencies like Hertz, Avis, and Enterprise, however, have had to seek their aid elsewhere, all the while hoping the U.S. Treasury Department answers their plea. Thus far, it's been crickets.

Car renters are confronting a harrowing reality. They need to refresh their gigantic fleets in a period where no one can turn a profit, there's little promise of a swift recovery, and used car values are cratering. Hertz started laying off workers in March as customers evaporated. By the end of April, it also announced it was defaulting on lease payments related to its fleet. With creditors rarely unclear about when they want their money, things were looking grim.

Fortunately, Hertz's latest filing with the U.S. Securities and Exchange Commission (SEC) indicates the company has entered into forbearances and limited waivers with certain corporate lenders and holders of the company's asset-backed vehicle debt. That document indicates that the firm now has until May 22nd to "engage in discussions with its key stakeholders with the goal to develop a financing strategy and structure that better reflects the economic impact of the COVID-19 global pandemic and Hertz' ongoing operating and financing requirements."

The original deadline was May 4th.

According to reports from Bloomberg , Hertz was actively preparing to file Chapter 11 court protections while in talks with creditors. Automotive News also had the lowdown on the company's massive fleet:

Hertz has traditionally been a leading buyer of fleet cars from the Detroit 3 and other automakers. Last year, Hertz held as many as 567,600 vehicles in its U.S. fleet and 204,000 in its international unit, holding those in the U.S. for an average of 18 months and international vehicles for 12 months, according to a U.S. filing.

That's a lot of cars to have just sitting around, depreciating. It highlights how much of a struggle Hertz will have moving forward. Many regions find themselves under extended lockdown orders lasting through May, limiting any opportunities the rental industry might have had for a rebound this month. Similarly, it's assumed that travel will be one of the last sectors to return to normalcy as large swaths of the population continue to practice social distancing. 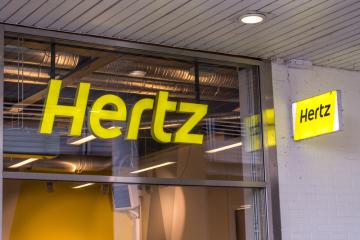