Tesla CEO Elon Musk made his second appearance on the Joe Rogan Experience podcast Thursday and dished out some unfortunate news for those waiting on the new Tesla Roadster : it's delayed.

From Musk's wording, it could be that the Roadster won't be ready until sometime in 2022. He told Rogan the Roadster likely isn't coming until after the Tesla Cybertruck and Semi launch. The carmaker plans to launch the Cybertruck in late 2021, and the Semi was recently delayed until the same year.

This is the new Tesla Roadster

When Tesla's Musk pulled off his Steve Jobs-esque "one more thing" moment and debuted the new Roadster in 2017 , the super powerful electric sports car was meant to launch this year. Tesla's taken deposits for the car in the amount of $50,000 since its debut, which goes toward the final sale price of $250,000.

For all that cash, buyers should receive a rocket of a car. Musk promised a 620-mile range, courtesy of a 200-kilowatt-hour battery, a 0-60 mph time of 1.9 seconds and a top speed of 250 mph with three electric motors onboard.

The Semi, meanwhile, will cost between $150,000 and $180,000 and go 500 miles on electricity. A handful of companies have already stepped up and placed orders for the electric truck, including FedEx. 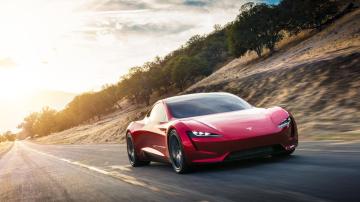