Stole someone else's car. Now everyone is laughing at him

A user of the Reddit site honestly told how everything happened, and attached a video of an accidental crime as proof.

That day, Matthew drove to work in his wife's minivan and parked it in the corporate Parking lot. And since the place is guarded and full of video cameras, I left my keys in the ignition. It's not very clear to us, but it seems that in quiet American cities, many people do this. You could see it in the movies...

During the lunch break, he got in the car and went to play pool with friends (did the boss know?). After 45 minutes, I drove back and suddenly noticed that the car is unusually clean, although his wife is not very neat. Looking around, he also noticed a child's seat in the back.

"Car seat? My youngest son is seven years old and we don't have a car seat! What's going on???" --- worried Matthew.

Finally, the guy realized that it wasn't his car at all. And that he took the exact same car by mistake, the owner of which also left the keys in the ignition.

The man panicked: there are cameras around, and he left in someone else's car and was absent for an hour. As he pulled into the Parking lot, he was worried that the police were already looking for him. But no, no one noticed it was missing. He parked the car and turned himself in to the guards.

The girl from the security service had a long time of fun after listening to his story. The real owner may have remained in the dark.

Matthew had no problems after that, except for the ridicule of his colleagues. Now he is often asked: "Are you sure you're driving your car right now?>> 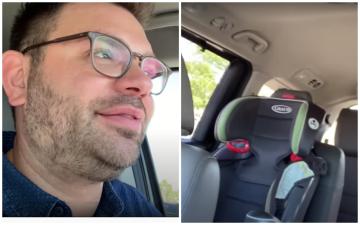