I get it: who wants to look like a soccer mom? That's why they stopped driving minivans. Instead, they all drive the new soccer mom car, a CUV. Nothing like separating from the herd!

As parents of four children... now all out of the house, supporting themselves and growing their families... we had a string of five minivans from 1992 into 2013. These were a Villager, a Windstar, and three Odysseys. We no longer need them, but nothing works better for a family by the time child #3 arrives. 2. Reply

I went through two minivans almost twenty years of driving. My first was a short wheelbase lightly optioned V6 Caravan, the second a fully loaded Chrysler Town and Country. We also had a new Honda Civic SI, plus I had my Harley Sportster. I was never embarrassed about driving those mini vans. They were extremely useful and comfortable, and with three kids the space was appreciated. I drove the wheels off that thing on many long road trips. For carrying passengers I think the minivan is better than a SUV. I've been a car enthusiast since I was a kid, but I never let the choice of a vehicle define me. 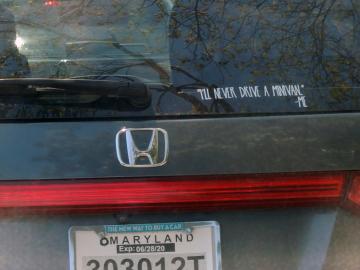