(first posted 5/28/2014. Turns out this was an option on 140 and 160 series Volvos up until 1972, but very rarely seen. And it required the column mounted shifter for the four speed manual. Both options were not offered in the US. The model was also an option, but she sold out very quickly)

This picture jolted me when I stumbled on it, and not just because of the occupant of this 144 sedan. I'd never seen or heard of a bench seat in a 144. Certainly it wasn't available in the US, and I'm 99% certain not in other export markets like Germany. So I'm guessing it was strictly a home-market option. Somewhat oddly, there's no evidence of a middle seat belt. And presumably, this is an automatic, because if someone tells me that Volvo also offered a column shift for their manual transmission, I'm really going to be flustered. 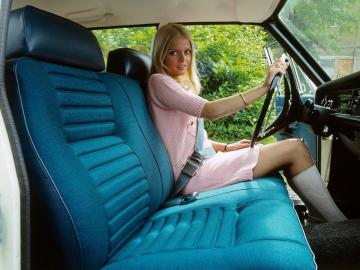