There's no easy way to avoid bringing water into the cabin of a car after launching a jet ski. Unless you have someone who can mind the jet ski while you go and park, you typically end up almost waist deep in water unloading the watercraft off the trailer and securing it, before you can go and ditch the car.

Which is why I have mastered the art of using neoprene seat covers, beach towels, and deep dish heavy-duty rubber floor mats with tall edges to protect whatever car I'm in at the time.

In this instance, our 2019 Audi Q7 long-termer is getting good use as a tow vehicle.

I had no idea the Audi Q7 had a towing capacity of 3500kg -- the same as most double-cab utes. I incorrectly assumed it had a nominal towing capacity. But that epic 3.0-litre turbo diesel V6 makes light work of pretty much anything you throw at it.

Towing a jet ski is not exactly hard work. Technically, the 600kg jet ski and trailer combination is possible to be hitched behind a Toyota Corolla or Hyundai i30 (both of which have a towing capacity of 1300kg).

That said, the Audi Q7 is equally as far away as a Toyota Corolla or Hyundai i30 from the stereotypical dual-cab utes usually attached to jet ski trailers, just on the other side of the price spectrum.

Nevertheless, it was a good opportunity to put the Audi Q7 through its paces in a new environment. Perhaps Audi figures it is missing out on the growing grey nomad market. Those buyers might not be interested in towing jet skis, but the Audi Q7 could easily haul a caravan in comfort and without much fuss.

Aside from towing with ease and not putting any undue stress on the Audi Q7's braking and suspension systems, there are some other helpful attributes.

Although the Audi trailer plug requires an adaptor (supplied with the genuine Audi tow bar, or about $50 to replace if you lose it) to fit the popular seven-pin plug used in Australia, this enables a repeater lamp to be displayed in the instrument cluster. It means you can see if the tail-lights on the trailer are working without having to get out of the car.

Reversing is easy, too, with better visibility than most double-cab utes. Helpfully, the rear parking sensors automatically disable as soon as a trailer plug is connected.

The other noteworthy observation: there is ample clearance above the tow ball to raise and lower the powered tailgate without fear of it clipping the trailer hitch or anything forward of the A-frame.

Fuel economy was barely affected by the jet ski trailer, so we continued to see 8L/100km or thereabouts without much effort or attempt to drive frugally.

The good news was, at the end of each day, I was able to carefully tip out the salt water from the heavy-duty rubber floor mat (from Supercheap, not Audi) without spilling any in the car. And the leather seats didn't even need a wipe down from wet clothing thanks to the layers of beach towels and portable neoprene seat covers that I transfer from car to car.

Best of all is the ride comfort after a long hard day on the water. After years of driving double-cab utes, the Audi Q7 is not only plush, it also feels as compact and as nimble as a Volkswagen Golf after a while. It doesn't feel like an SUV at all. I'm not looking forward to handing it back. 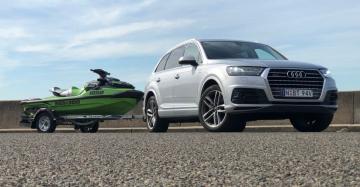