The Tesla Fremont factory drama continues today, with the San Francisco Chronicle reporting that Alameda County officials sent a letter to Tesla ordering the company to cease manufacturing vehicles. This past weekend, Tesla began building vehicles again after CEO Elon Musk announced that the company was suing the county.

Tesla's Response to the Crisis

The letter is addressed to Tesla's vice president of environment, health, and safety, Laurie Shelby. TheChronicle reports that the letter, which is from Alameda County Health Care Services Agency director Colleen Chawla, states Tesla and the county must first agree on a protocol in line with local and state rules before it can legally reopen.

Alameda County's statement reads, in part: "We have notified Tesla that they can only maintain Minimum Basic Operations until we have an approved plan that can be implemented in accordance with the local public health order."

Musk has taken to Twitter to voice his displeasure with the shelter-in-place orders, calling them "fascist" and unconstitutional. On May 11, he announced that the factory was producing vehicles and tweeted, "If anyone is arrested, I ask that it only be me."

Tesla is restarting production today against Alameda County rules. I will be on the line with everyone else. If anyone is arrested, I ask that it only be me. --- Elon Musk (@elonmusk) May 11, 2020

Alameda County issued a statement: "We have notified Tesla that they can only maintain Minimum Basic Operations until we have an approved plan that can be implemented in accordance with the local public health order."

Tesla and the county had been working towards a reopening solution ahead of the drama that unfolded beginning last week, when Tesla sent an email to employees stating the factory would open on May 8 in violation of the county's shelter-in-place mandate. Alameda County supervisor Scott Haggerty told the New York Times: "We were working on a lot of policies and procedures to help operate that plant and quite frankly, I think Tesla did a pretty good job, and that's why I had it to the point where on May 18, Tesla would have opened."

Musk has called out Haggerty on Twitter, tweeting: "Haggerty actually admitted to NYT that he told his staff to "slow down" Tesla for reasons that had nothing to do with health. Unreal . . ." in response to a tweet from a follower. The full quote was in response to Musk's threat to sue the county. "It was only a threat, and as an elected official I get threatened all the time," Haggerty said, as quoted by the Times. "It does at that point slow down conversations between my contact at the plant and myself."

Meanwhile, The Guardianreports that Tesla sent an email to employees concerning the reopening of the factory. As it reproduced the text of the email, it said: "If you do not feel comfortable coming into work, you can stay home and will be on unpaid leave. Choosing not to report to work may eliminate or reduce your eligibility for unemployment depending on your state's unemployment agency." 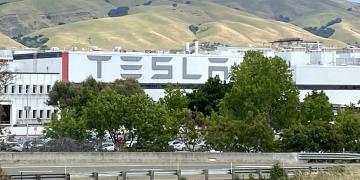