Photos have been posted on social media, showing what looks to be the upcoming, next-generation Mercedes-Benz S-Class. The photos show the car with minimal camouflage sitting in what looks to be a scrapyard. The photos are unverified at the moment, however, they clearly show the new S-Class in all its glory.

So what do the photos show? As you would expect, the German behemoth has not strayed from the tried and tested formula. The S-Class remains a large sedan, with an imposing front grille and a lavish interior.

The photos show that front grille grows in size with six chrome horizontal stakes. In the middle sits a large housing for various sensors. The S-Class is expected to go big on technology, in keeping with tradition. Mercedes-Benz has previously confirmed that the new S-Class will ship with level 3 autonomy.

At the rear, the taillights are tear-drop shaped, a design cue we saw on other models, such as the CLA-Class.

Inside, the S-Class gets a modern interior. The front features two prominent LCD screens, one traditionally dashboard mounted, the other lower down where the MMI and air conditioning controls would normally be found. This leaves large areas of the dashboard completely free of clutter.

The photos show that the S-Class gets a new Supersport steering wheel which debuted in the new E-Class recently. The rear seats get tablet-style infotainment screens too.

The new Mercedes-Benz S-Class is expected to debut sometime later this year, although that timeline is uncertain at the moment due to the ongoing pandemic. 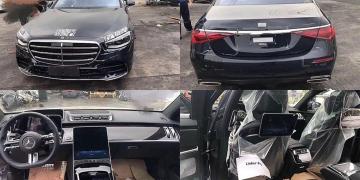