The Peugeot 504 was of course the other relatively popular European diesel in the US (and Europe) along with the Mercedes before the VW Rabbit came along. It offered a somewhat cheaper alternative to the Benz, as well as a superb ride. For 1977, the 504'd diesel engine got an increase in displacement and of course power, now a whopping 71 hp. Its 0-60 time of 21.7 seconds was a lot slower than the new diesel Rabbit (15.8 sec.), but then this 504 was also saddled with the automatique, a three speed unit supplied by ZF, if I'm not mistaken.

Peugeot was stretching the truth with its "50th anniversary of building diesel-powered production cars" claim. In reality, they did install some light truck diesel engines their 402 sedan back in 1939. But then light truck diesels are pretty much the same thing. The first regular series Peugeot diesel passenger car was the 403 starting in 1959, and the 504's engine was a direct evolution of that.

R\&T noted that the Peugeot diesel was louder than the Mercedes or VW diesels. That confirms my own experience; they had a particularly strong clatter, even after warmed up. 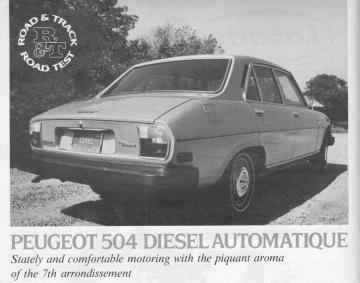