In the Coronatime, I've had the chance to take a lot of long strolls through various Berkeley neighborhoods. Not too long ago, I wrote of an unlikely Plymouth/Beemer pair living in harmony. About a mile from that pair, and parked about a block away from each other, I found another grouping! Seems like there is an unlikely but powerful attraction between Neu-Klasse-era Beemers and muscle-car era Plymouths. Who would have guessed?

This is a rare (at least in America) 1602 sedan, from 1970 according to the California smog-check database. The esteemed editor of this website has informed me that this example must be a later import, as the "1602" was badged simply as a "1600" in the U.S. -- Learn something everyday! It has the round tail lights and small bumpers which it shares with the red 1969 2002 that I owned so long ago. I think these are so much better looking than the square tail-lights and large bumpers of the later 1974 models. The rear of the Road Runner is amazingly clean. I go back-and-forth on the Fuselage-styled Chryslers. Somedays to me they look variously outrageous, stunning, massive, and unique. Other days they just look massive and heavy, with small windows and a claustrophobic interior as compared with the light and airy (IMHO) 1965-1968 Mopar products.

There are no callouts on the hood, so this is almost certainly powered by the Chrysler 318 cu. in V-8, a durable and reliable powerplant, though not the equal of the optional 360 small-block, or 400 or 440 big-blocks. I was not able to get a good shot of the interior, but it was almost certainly ordered with the 3-speed Torqueflite, though a 3-speed was standard and a 4-speed manual was optional for at least some engine combinations through to the end of the second-generation's life in 1974. The exterior differences between the 1973 and 1974 Road Runner are very small, just a small change in the grille. As best as I can tell this is a 1974, it does not show up in the California Smog Check Database.

This Neu-Klasse-era BMW has a face that can take on a lot of different characters, from vaguely menacing to sweet and innocent. This face too me looks like the face of an old warrior, no longer menacing, but with all the memories of battles fought long ago, and smiles for you as it tells its stories. From my vantage point a 1602 BMW is a rare sight in America, I see many more of its 2002 stablemate, this car is definitely a survivor in more ways than one. Inside the 1602, the interior has been tastefully redone, with some nice looking seats, but retaining the rest of the original features, if perhaps not the original materials. Is that some fake woodgrain on the dash? I would not have suspected that. Berkeley is still issuing parking tickets for street-sweeping, and it looks like this little 1602 got caught. I know you call a group of crows a "murder", perhaps similarly a group of Mercurys is a "Maraud", and I suggest a group of coupes is a "Scoop". What names for different automotive groupings do you suggest? 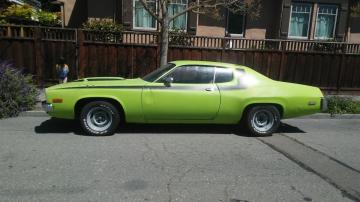